Try now - Live tracking map for yachts and other vessels

Black Pearl  is a sailing mega yacht launched in 2016, which is 106.7 meters in length. It has three DynaRig masts supporting a sail area of 2,900 square meters.

The yacht was known during its build process originally as Oceanco Y712 and thereafter as “Project Solar”. The hull is steel, the superstructure aluminum, and the masts carbon fiber. The yacht is owned by Russian millionaire Oleg Burlakov. 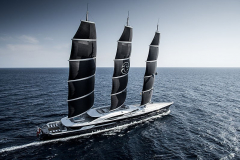 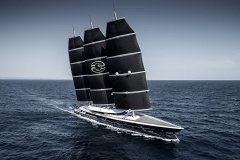 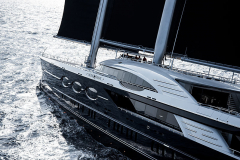 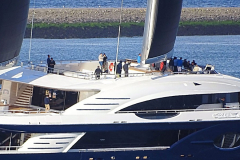 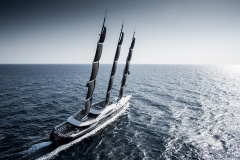 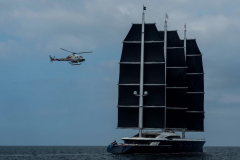 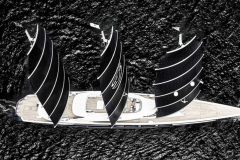 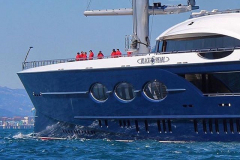 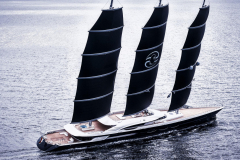 It is expected that Black Pearl can cross the Atlantic using only 20 litres (4.4 imp gal; 5.3 US gal) of fuel, aided by regenerative technologies. One key technology to support this, is to use the speed of the vessel through the water under sail to generate electricity with a variable pitch propeller. The yacht also features heat capture technologies and large scale storage batteries to capture energy generated but not immediately used.

Inspired by the 88 m (289 ft) Maltese Falcon, the intention behind the project was to push the boundaries of the DynaRig system and demonstrate the potential for larger DynaRig-equipped vessels.

The creation of the yacht, then known as “Project Solar”, began on 7 July 2010 when Ken Freivokh was contracted to handle styling and design on the project. Given their involvement with Maltese Falcon, Freivokh introduced Dykstra Naval Architects to the project and the team were able to advance the DynaRig system and to improve performance through changes both to mast shape and installation. The 96 m (315 ft) preliminary concept that resulted was codenamed “Nautilus”.

By November 2011 Freivokh had extended the design from 96 m to 100 m (328 ft) and a scale model was produced. Dutch builders Oceanco were selected from the tendering process to construct the yacht at their Rotterdam (The Netherlands) shipyard.

The design and details of the yacht developed continuously during the build process, with the owner having a direct input on many aspects of the final design. The final design had the yacht at 106.8 m,and the yacht, built under the name Y712, was then named Black Pearl.

The overall yacht design was done by Ken Freivokh, Gerard Villate, Nigel Gee, and Nuvolari Lenard, with others. The yacht was constructed at Oceanco, a shipyard in Alblasserdam, the Netherlands and launched in September 2016.

It was delivered in early 2018 to the customer, after it had undergone sea trials.

Black Pearl is a sailing yacht with three 70-meter (230 ft) high masts, and is capable of 30 knots (56 km/h) in suitable weather conditions. It also has diesel engines that can propel it to 17.5 knots (32 km/h). She is capable of accommodating up to 12 guests in one master suite, two VIP and two double guests cabins.

As a private yacht Black Pearl can accommodate 12 guests and has various features including an on-deck Jacuzzi, convertible cinema, full beam beach club, and a tender garage. Total interior volume is 2,700 gross tons. She has also won the Sailing Superyacht of the Year Award in 2019.

Black Pearl Mega Yacht is designed to generate electricity to power its on-board systems, by using its propeller as a turbine as the yacht is propelled by the wind.

Under sea trials Black Pearl achieved 20 knots of speed on the water, and its developers expect that it will be able to transit the Atlantic using no fuel.

Megayachtguy.com  is a participant in the Amazon Services LLC Associates Program, an affiliate advertising program designed to provide a means for sites to earn advertising fees by advertising and linking to Amazon.com.

Try to find your favorite yacht on a map

Real time world map for tracking yachts and all other vessels like speed boats, cargo or tankers!